Russian friends - resources for downloading copies of Wikipedia, Tor mirrors, and messages to the people of Russia.

The Russian government has officially blocked the main Tor website in Russia. Users can circumvent this block by visiting the website mirror - https://tor.eff.org/ 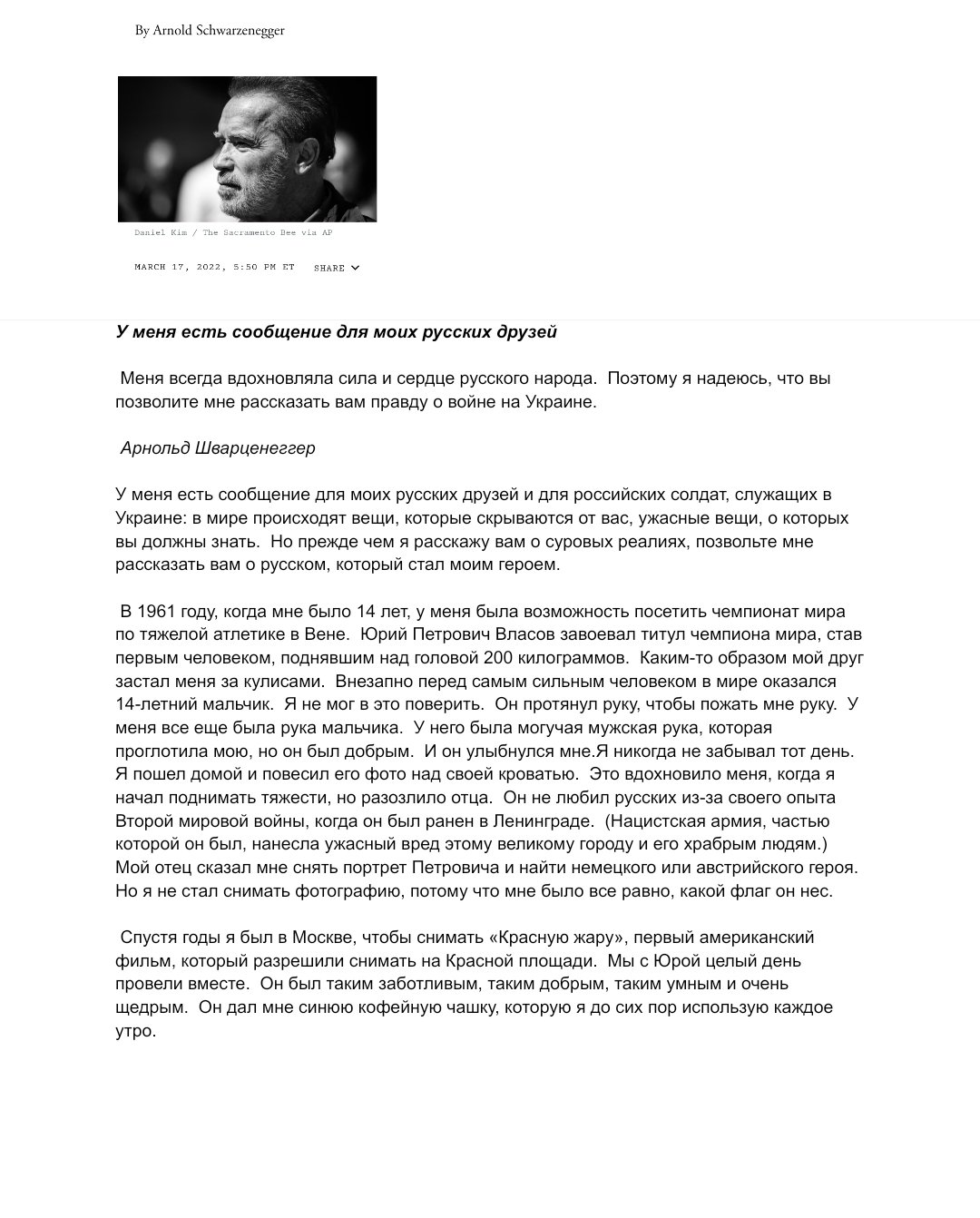 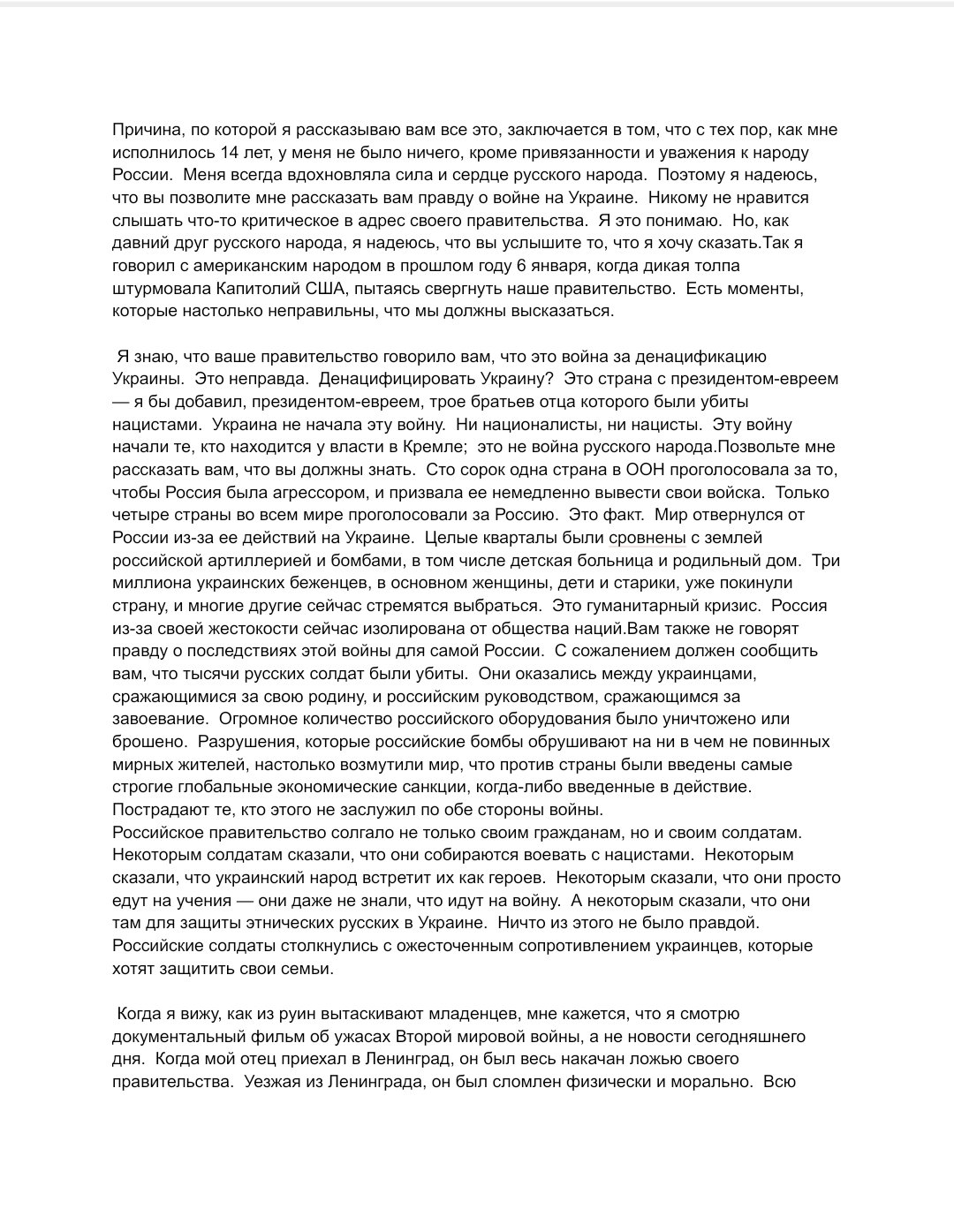 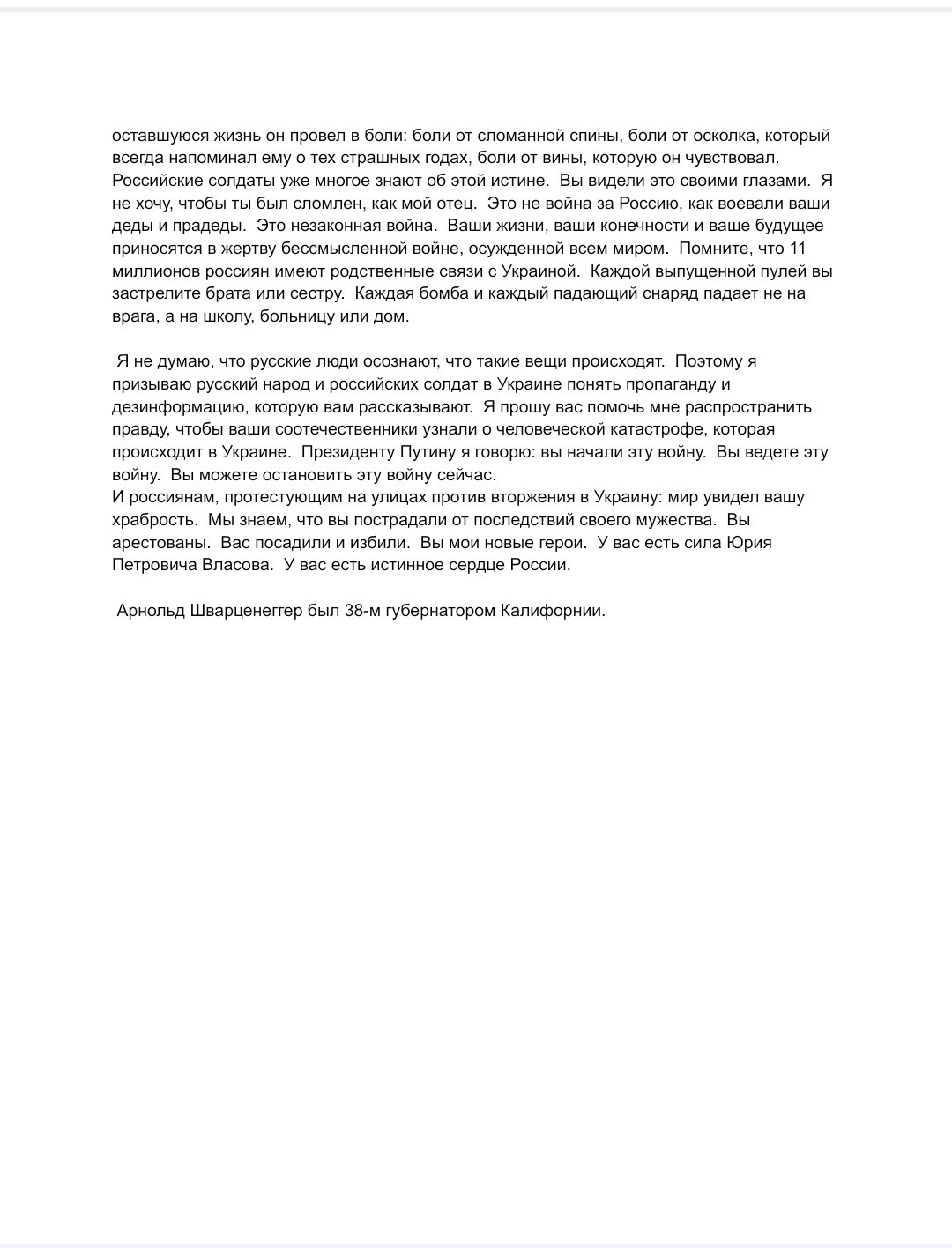 Hello everybody, and thank you for sharing your time with me. I’m sending this message through various different channels to reach my dear Russian friends, and the Russian soldiers serving in Ukraine.

In 1961 when I was 14 years-old, a very good friend of mine invited me to come to Vienna to watch the World Weightlifting Championship. I was in the audience when Yuri Petrovich Vlasov won the World Championship title, becoming the first human being to lift 200 kilograms over his head. And somehow a friend of mine got me backstage.

All of a sudden, there I was, a 14-year-old boy standing in front of the strongest man in the world. I couldn’t believe it. He reached out to shake my hand—I mean, I still had a boy’s hand. He had this powerful man’s hand that swallowed mine, but he was kind, and he smiled at me. I will never forget that day. Never.

I went home and I put his photo above my bed to inspire me when I started lifting weights. My father told me to take down that picture and to find a German or an Austrian hero. He got really angry, and we argued back and forth.

He didn’t like Russians, because of his experience in the second World War. You see, he was injured at Leningrad, where the Nazi army that he was part of did vicious harm to the great city and to its brave people. But I did not take the photograph down, no. Because it didn’t matter to me what flag Yuri Vlasov carried.

My connections to Russia didn’t stop there, by the way. Oh, it actually deepened when I traveled there, with bodybuilding and for my movies and met all my Russian fans.

And then one of those trips I remember I met Yuri Vlasov once again. It was in Moscow during the filming of Red Heat, which was the first American movie allowed to film in Red Square. Now, he and I spent the day together. He was so thoughtful, so kind, and so smart. And, of course, very giving. He gave me this beautiful, blue coffee cup. And ever since then I’ve been drinking my coffee out of it every morning.

Now, the reason why I’m telling you all of those things is that ever since I was 14 years old, I’ve had nothing but affections and respect for the people of Russia. The strength and the heart of the Russian people have always inspired me.

And that is why I hope that you will let me tell you the truth about the war in the Ukraine and what is happening there.

No one likes to hear something critical of their government. I understand that. But, as a longtime friend of the Russian people, I hope that you will hear what I have to say. And may I remind you that I speak with the same heartfelt concern as I spoke to the American people when there was an attempted insurrection on January sixth last year, when a wild crowd was storming the U.S. Capital, trying to overthrow our government.

You see, there are moments like this that are so wrong, and then we have to speak up. This is exactly the same with your government. I know that your government has told you that this is a war to denazify Ukraine. Denazify Ukraine? This is not true! Ukraine is a country with a Jewish president. A Jewish president, I might add, whose father’s three brothers were all murdered by the Nazis.

DENAZIFY UKRAINE? THIS IS NOT TRUE! UKRAINE IS A COUNTRY WITH A JEWISH PRESIDENT.

You see, Ukraine did not start this war. Neither did nationalists or Nazis. Those in power in the Kremlin started this war. This is not the Russian people’s war. No. As a matter of fact, let me tell you, what you should know is that 141 nations at the U.N. voted that Russia was the aggressor. They called for it to remove its troops immediately.

Only four countries in the entire world voted with Russia. That is a fact. See, the world has turned against Russia because of its actions in the Ukraine. Whole city blocks have been flattened by Russian artillery and bombs, including a children’s hospital and a maternity ward. Three million Ukrainian refugees—mainly women, children, and the elderly—fled their country, and many more are trying to seek to get out.

It is a humanitarian crisis. Because of its brutality, Russia is now isolated from the society of nations.

You’re also not being told the truth about the consequences of this war on Russia itself. I regret to tell you that thousands of Russian soldiers have been killed. They have been caught between the Ukrainians fighting for their homeland and the Russian leadership fighting for conquest.

Massive amounts of Russian equipment have been destroyed or abandoned. The destruction that Russian bombs are raining down upon innocent civilians has so outraged the world that the strongest global economic sanctions ever taken have been imposed on your country. Those who don’t deserve it on both sides of the war will suffer.

The fact is that Russian soldiers have faced fierce resistance from the Ukrainians who want to protect their families and their country. When I see babies being pulled out of ruins, I think that I am watching a documentary about the horrors of the Second World War, not the the news of today.

Now let me tell you, when my father arrived in Leningrad, he was all pumped up on the lies of his government. And when he left Leningrad, he was broken, physically and mentally. He lived the rest of his life in pain. Pain from a broken back, pain from the shrapnel that always reminded him of those terrible years. And pain from the guilt that he felt.

To the Russian soldiers listening to this broadcast, you already know much of the truth that I’ve been speaking. You have seen it with your own eyes. I don’t want you to be broken like my father. This is not the war to defend Russia that your grandfathers or your great-grandfathers fought. This is an illegal war.

Your lives, your limbs, your futures, are being sacrificed for a senseless war condemned by the entire world.

THIS IS NOT THE WAR TO DEFEND RUSSIA THAT YOUR GRANDFATHERS OR YOUR GREAT-GRANDFATHERS FOUGHT. THIS IS AN ILLEGAL WAR.

Now, to those in power in the Kremlin, let me just ask you: Why would you sacrifice those young men for your own ambitions?

To the soldiers who are listening to this, remember that 11 million Russians have family connections to Ukraine. So every bullet you shoot, you shoot a brother or a sister. Every bomb or every shell that falls, is falling not on an enemy but on a school, or a hospital, or a home. I know that the Russian people are not aware that such things are happening.

So I urge the Russian people and the Russian soldiers in Ukraine to understand the propaganda and the disinformation that you are being told. I ask you to help me spread the truth. Let your fellow Russians know the human catastrophe that is happening in Ukraine.

Now let me close with a message to all of the Russians who have been protesting in the streets against the invasion of Ukraine: The world has seen your bravery. We know that you have suffered the consequences of your courage. You have been arrested. You have been jailed. And you have been beaten. You are my new heroes.

You have the strength of Yuri Petrovich Vlasov. You have the true heart of Russia. My dear Russian friends, may God bless you all.