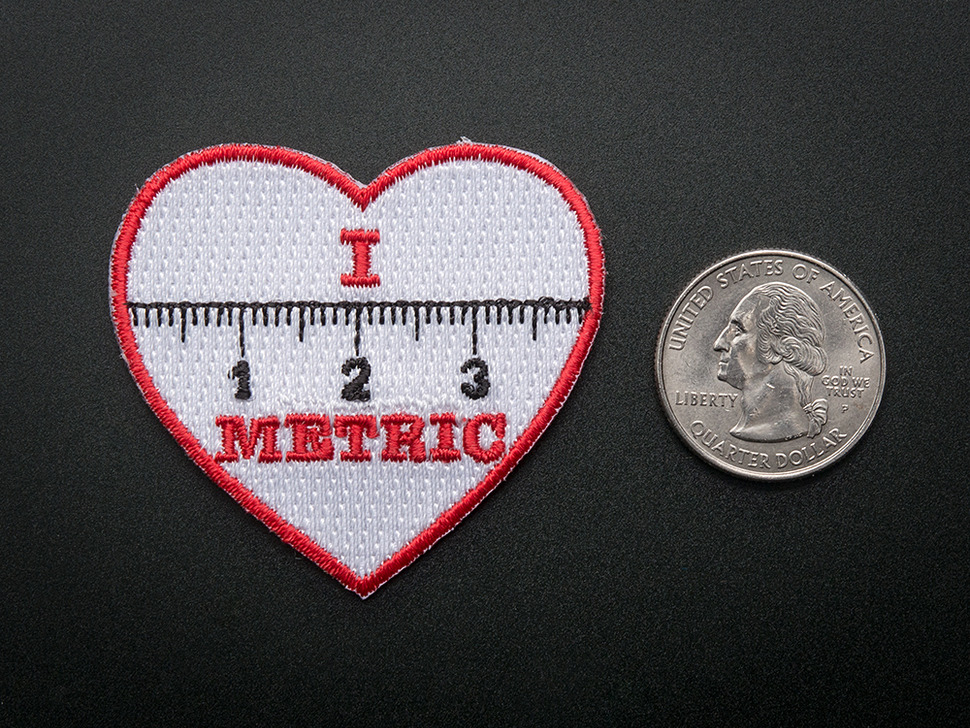 You have learned the metric system and LOVE IT. Adafruit offers a fun and exciting "badges" of achievement for electronics, science and engineering. We believe everyone should be able to be rewarded for learning a useful skill, a badge is just one of the many ways to show and share.

This is the "I heart metric" badge for use with educators, classrooms, workshops, Maker Faires, TechShops, Hackerspaces, Makerspaces and around the world to reward beginners on their skill building journey!

This beautiful badge is made in the USA.

The badge is skillfully designed and sturdily made to last a life time, the backing is iron-on but the badge can also be sewn on.

The Metric System is an international decimalised system of measurement. France was first to adopt a metric system, in 1799, and a metric system is now the official system of measurement, used in almost every country in the world. The United States is the only industrialised country that has not defined a metric system as its official system of measurement, although the use of a metric system has been sanctioned for use there since 1866. Although the United Kingdom committed to officially adopting a metric system for many measurement applications, one is still not in universal use there and the customary imperial system is still in common and widespread use. Although the originators intended to devise a system that was equally accessible to all, it proved necessary to use prototype units under the custody of government or other approved authorities as standards. Until 1875, control of the prototype units of measure was maintained by the French Government when it passed to an inter-governmental organisation – the Conférence générale des poids et mesures (CGPM). It is now hoped that the last of these prototypes can be retired by 2014.

Adafruit's embroidered badges are manufactured in partnership with AMBRO Manufacturing located in NJ, USA. AMBRO is a family owned and operated business since 1990 that celebrates open-source with Adafruit Industries. You can meet their team here. AMBRO uses non-toxic soy based, water soluble and environmentally friendly printing supplies, threads and more when possible. AMBRO has over 250 solar panels that generate 50,000 Kilowatt hours per year. Their equipment runs solar powered, so the wonderful things AMBRO and Adafruit have worked together on are made with the sun! AMBRO Manufacturing was recognized by Impressions Magazine, a leading trade publication in the garment printing and embroidery business, who published an article highlighting AMBRO and their commitment to their environmentally focused manufacturing practices. Adafruit knows you have a lot of choices as to where you spend your money and time, we hope our open-source values, commitment to green technologies and partners helps make the decision easier and fun!

Adafruit and AMBRO will be publishing the embroidery machine files as "open-source". The files were optimized for: