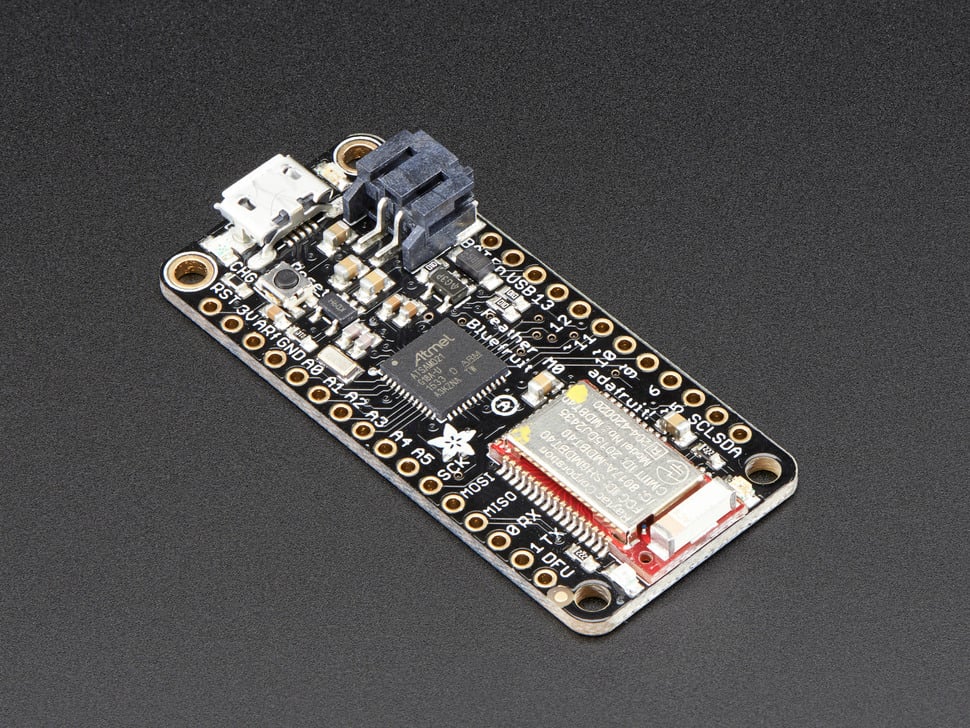 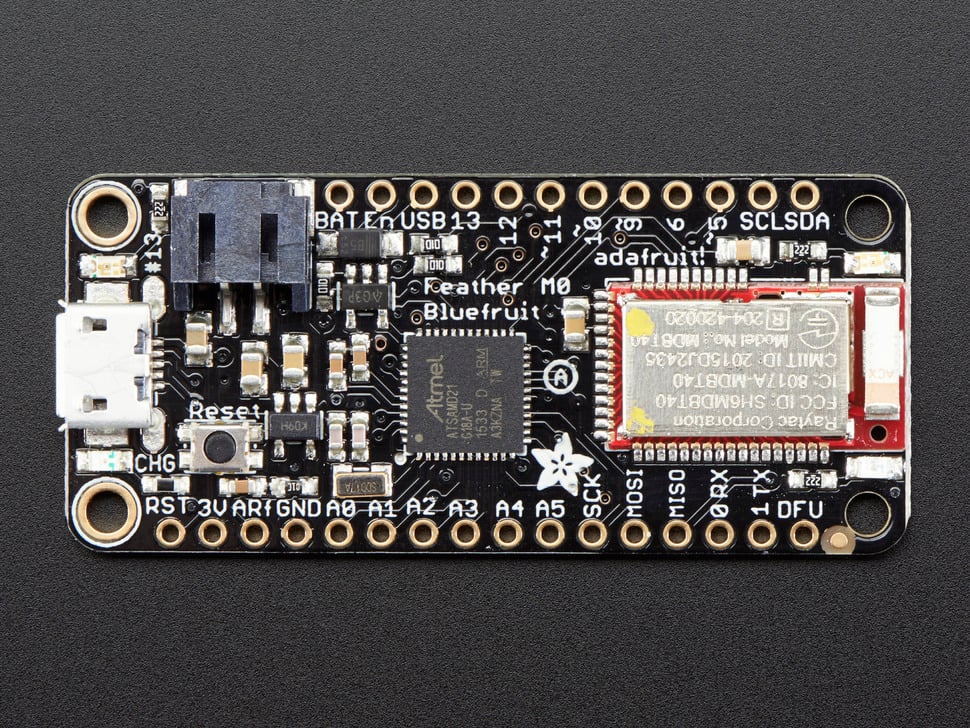 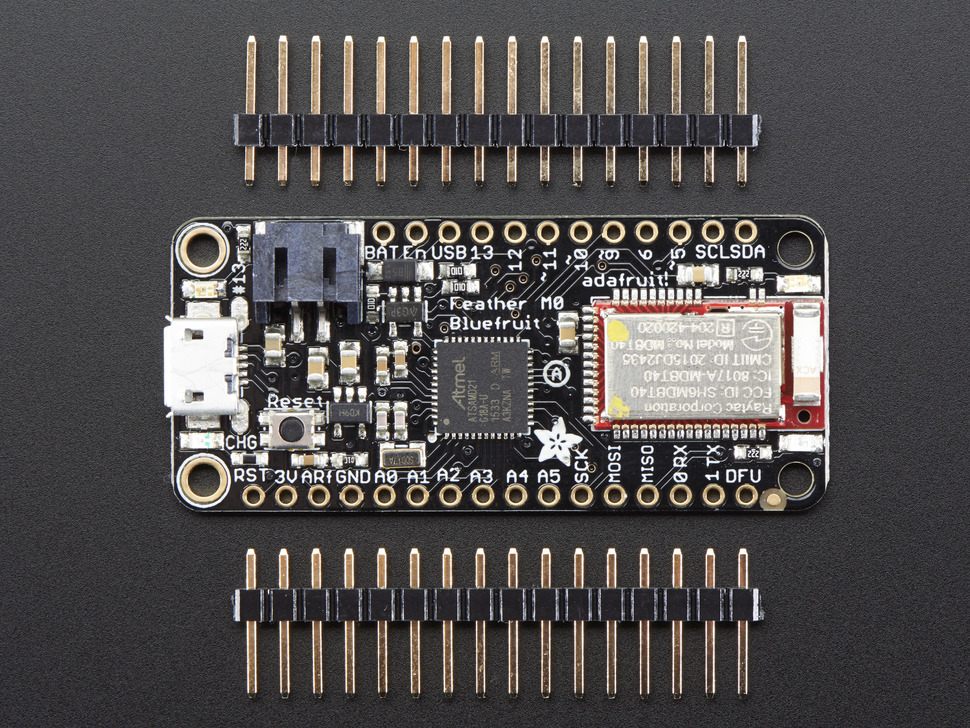 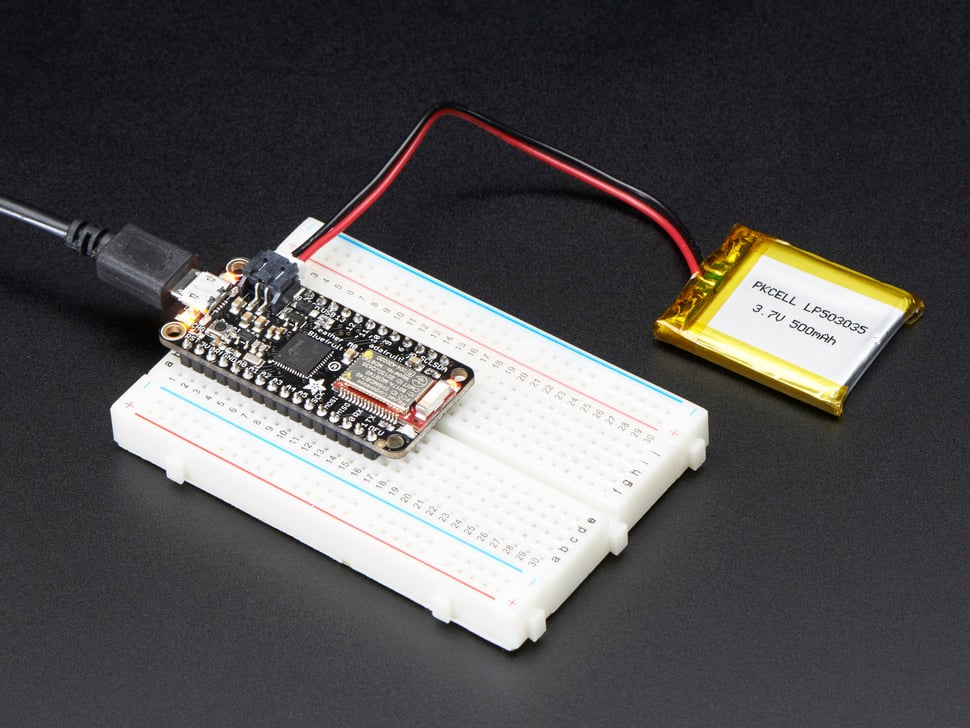 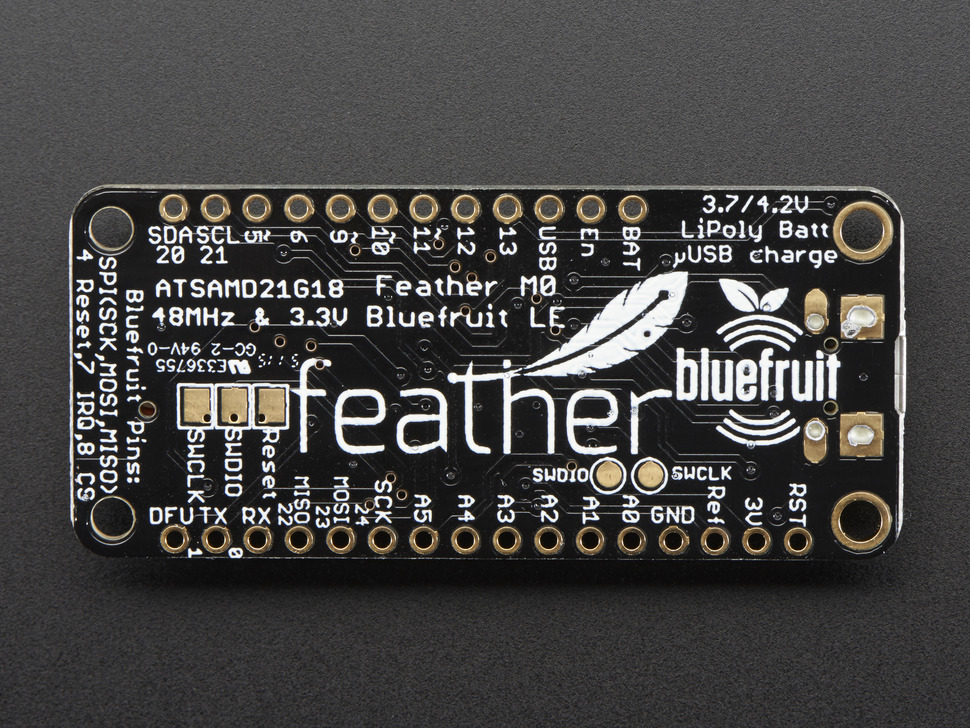 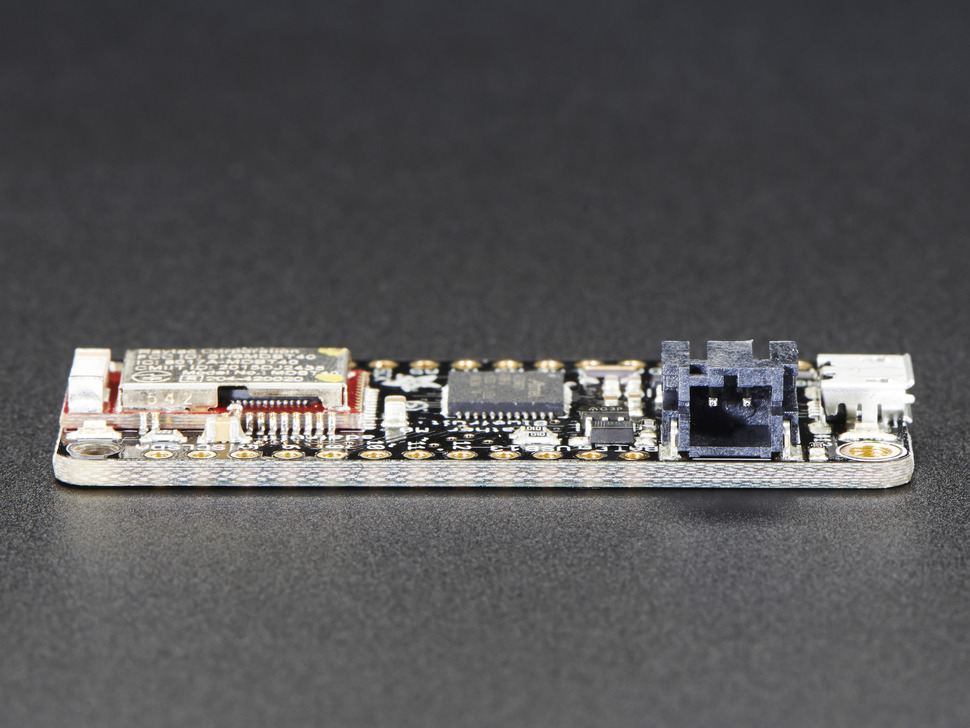 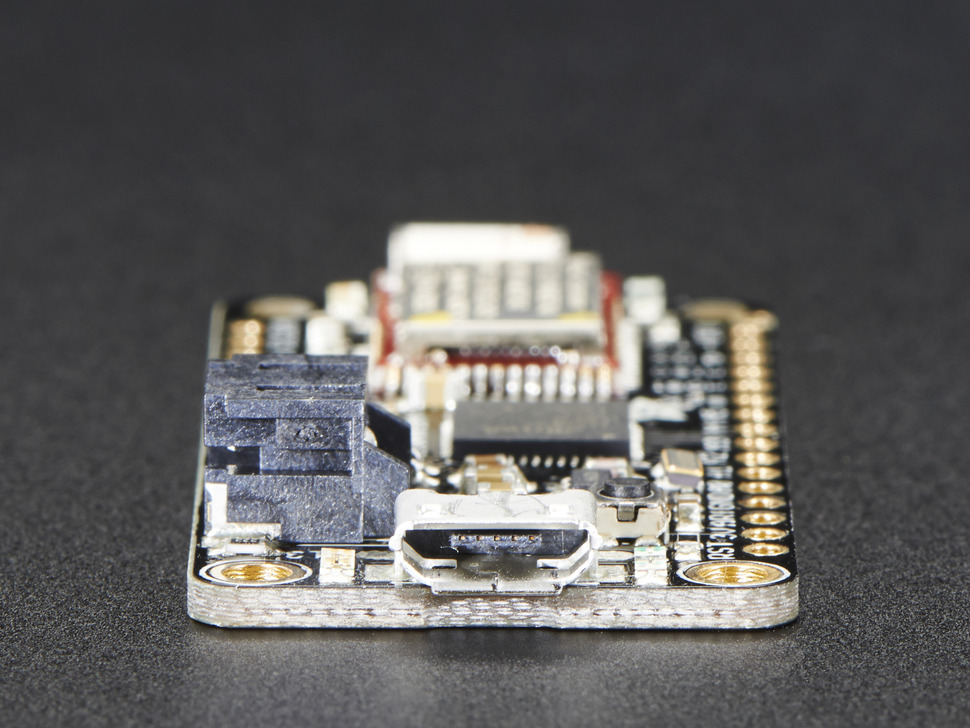 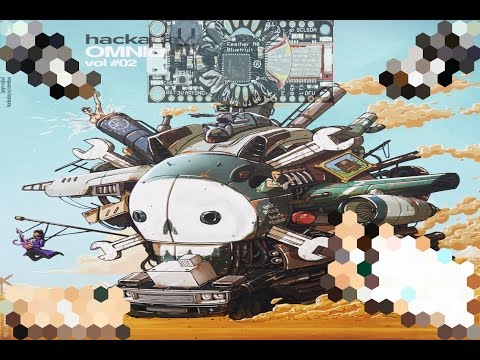 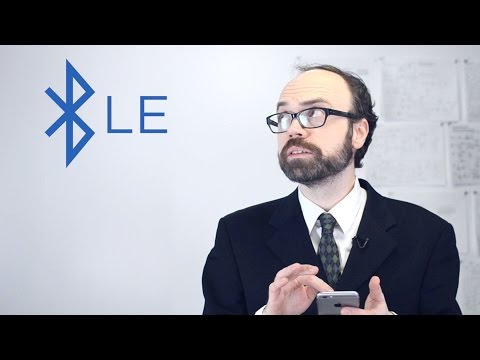 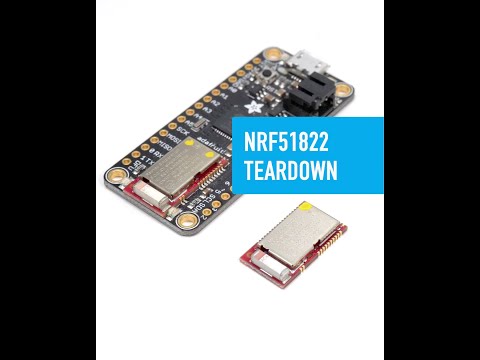 Feather is the new development board from Adafruit, and like its namesake, it is thin, light, and lets you fly! We designed Feather to be a new standard for portable microcontroller cores.

This is the Adafruit Feather M0 Bluefruit LE - our take on an 'all-in-one' Arduino-compatible + Bluetooth Low Energy with built-in USB and battery charging. It's an Adafruit Feather M0 with a BTLE module, ready to rock! We have other boards in the Feather family, check'em out here.

Bluetooth Low Energy is a hot, low-power, 2.4GHz spectrum wireless protocol. In particular, it's the only wireless protocol that you can use with iOS without needing special certification, and it's supported by all modern smartphones. This makes it excellent for use in portable projects that will make use of an iOS or Android phone or tablet. It also is supported in Mac OS X and Windows 8+.

We have quite a few BTLE-capable Feathers (it's a popular protocol!) so check out our BT Feather guide for some comparison information.

At the Feather M0's heart is an ATSAMD21G18 ARM Cortex M0 processor, clocked at 48 MHz and at 3.3V logic, the same one used in the new Arduino Zero. This chip has a whopping 256K of FLASH (8x more than the Atmega328 or 32u4) and 32K of RAM (16x as much)! This chip comes with built-in USB so it has USB-to-Serial program & debug capability built-in with no need for an FTDI-like chip.

To make it easy to use for portable projects, we added a connector for any of our 3.7V Lithium polymer batteries and built-in battery charging. You don't need a battery, it will run just fine straight from the micro USB connector. But, if you do have a battery, you can take it on the go, then plug in the USB to recharge. The Feather will automatically switch over to USB power when it's available. We also tied the battery thru a divider to an analog pin, so you can measure and monitor the battery voltage to detect when you need a recharge.

Here are some handy specs! Like all Feather M0's you get:

The Power of Bluefruit LE

The Bluefruit LE module is an nRF51822 chipset from Nordic, programmed with multi-function code that can do quite a lot! For most people, they'll be very happy to use the standard Nordic UART RX/TX connection profile. In this profile, the Bluefruit acts as a data pipe, that can 'transparently' transmit back and forth from your iOS or Android device. You can use our iOS App or Android App, or write your own to communicate with the UART service.

The board is capable of much more than just sending strings over the air!  Thanks to an easy-to-learn AT command set, you have full control over how the device behaves, including the ability to define and manipulate your own GATT Services and Characteristics or change the way that the device advertises itself for other Bluetooth Low Energy devices to see. You can also use the AT commands to query the die temperature, check the battery voltage, and more, check the connection RSSI or MAC address, and tons more. Really, way too long to list here!

Use the Bluefruit App to get your project started

Using our Bluefruit iOS App or Android App, you can quickly get your project prototyped by using your iOS or Android phone/tablet as a controller. We have a color picker, quaternion/accelerometer/gyro/magnetometer or location (GPS), and an 8-button control gamepad. This data can be read over BLE and piped into the ATSAMD21G18 chip for processing & control

You can do a lot more too!

Comes fully assembled and tested, with a USB bootloader that lets you quickly use it with the Arduino IDE. We also toss in some header so you can solder it in and plug into a solderless breadboard. Lipoly battery and MicroUSB cable not included (but we do have lots of options in the shop if you'd like!)

Check out our tutorial for all sorts of details, including schematics, files, IDE instructions, and more! 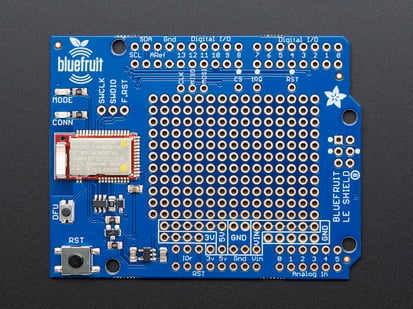 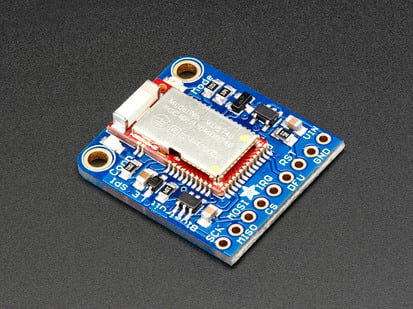 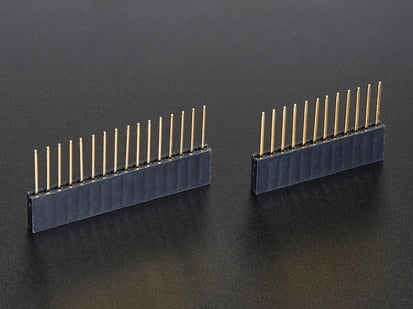 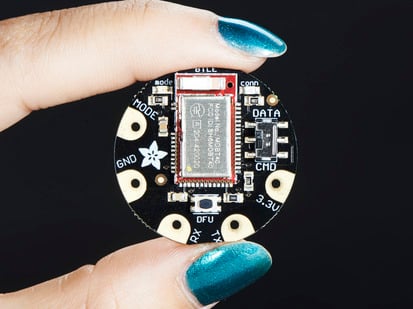 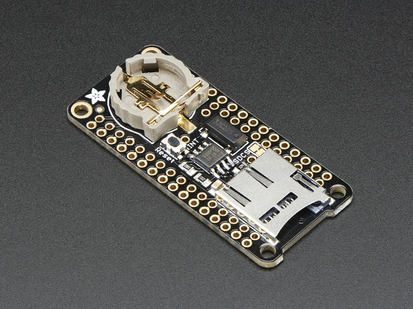 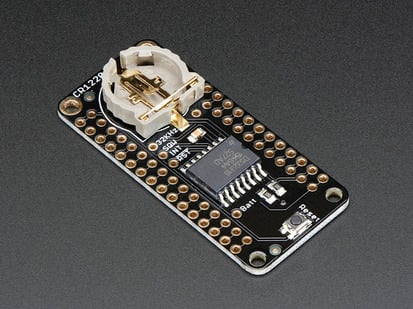